Can I buy one, 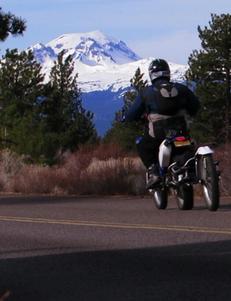 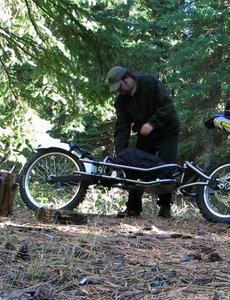 Why a Single Wheel Design?

Why mount through the rear axle?

How much weight can it carry?

Is it Street Legal?

How can I get one?


+WHY THE SINGLE WHEEL DESIGN:
+THE BIGGEST ADVANTAGE OF A SINGLE WHEEL TRAILER IS  IT DOESNT GET AFFECTED BY ROUGH & LATERALLY UNDULATING TERRAIN LIKE A TWO WHEELED TRAILER

+IT ESSENTIALLY FOLLOWS THE SAME TRACK AS ITS TOW VEHICLE, WHICH IS ESPECIALLY NICE WHEN TOWING WITH A MOTORCYCLE OVER A ROUGH SINGLE-TRACK TRAIL


+WHY A TRAILER:
+WHEN HAULING GEAR ON A MOTORCYCLE, QUAD, OR ATV, ITS BEST TO KEEP THE WEIGHT AND CENTER OF GRAVITY DOWN  AS  LOW AS POSSIBLE & THE SPiN TRAILER MAKES THAT POSSIBLE.


+HOW MUCH WEIGHT CAN IT HANDLE:

+HITCHES AND ADAPTORS ALSO AVAILABLE FOR MOST MOTORCYCLES, QUAD & ATVS

+IS IT STREET LEGAL:

FIRST OFF, LETS ADDRESS THE MOST OBVIOUS QUESTION:​ 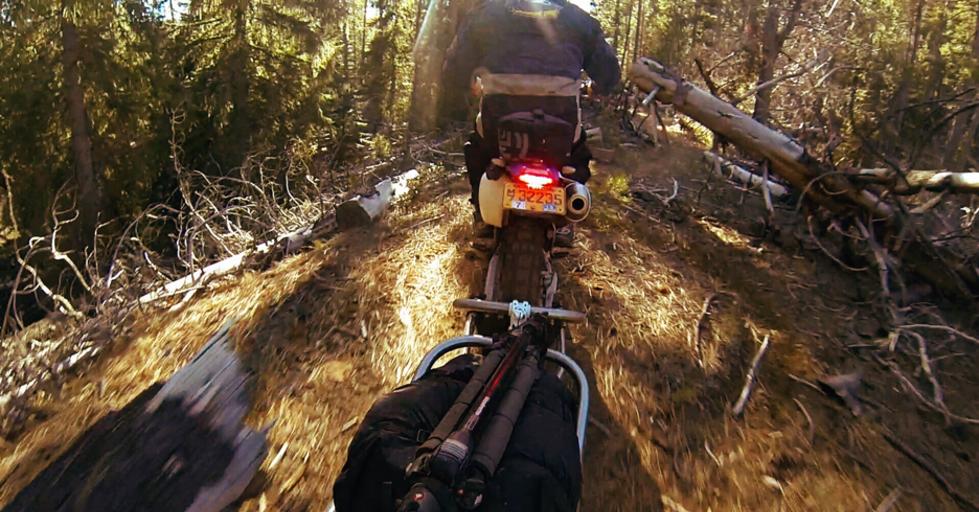 Right now, prototype and pre-production trailers have been built, tested and abused. The Revolution Cargo System is now ready for it's public debut and to finally enter production.

We are creating a Crowd Funding Campaign to help us take this system to the next level. The final funding we obtain from our campaign will determine the availability and final cost of the production system. The success of that campaign will directly affect the cost of the final production unit. Basicly, the more manufacturing we can do in-house, the more the overall expense will decrease and the more the final quality control will increase - a win win scenario for everyone involved!

When the time comes, checkout our crowd funding campaigns and help this system enter into production. Together we can make this system a reality for all!

The Revolution trailer connects through or near the rear axle of the motorcycle. Connecting through the exact center of the spinning mass of the rear wheel is the best way to eliminate unwanted torque, gyroscopic energy, or impact transfer from the trailer into the bike, keeping trailer input felt by the rider to an adjustable and predictable minimum. Connecting to the motorcycle in this way allows the trailer's energy to be transferred directly into the gyroscopic and energy dampening characteristics of the spinning rear wheel. Just as it is difficult to turn a spinning gyro in your hand, the spinning gyro here, the rear wheel, also resists being quickly manipulated resulting in a much more tunable system. Connecting low also gives the trailer's energy the least amount of leverage for it to be transferred into the bike itself.

Being able to keep unnecessary weight off of the bike's suspension and subframe, allows for a more rideable, enjoyable, responsive and longer lasting motorcycle. Why have the bike's suspension set up so once you get there you can't enjoy it...?​ The QR Style Hitch quickly disconnects from the tow vehicle allowing exploration of the area without the constrictions caused by carrying all of your gear.

Now, lets be honest, usually it's the big bulky items that have the most potential to make a trip more enjoyable.  A nicer sleeping pad, an extra blanket or pillow, a chair, an extra gallon of water, things like that are usually the items that get left behind, and yet they're the ones that make the trip a little more comfortable and can change a trip from a grueling grind to an epic and enjoyable journey. The Revolution system allows you to carry more than just what you might need....

The Revolution Cargo Carrying System is a trailer designed to be used both in conjunction with other luggage carrying systems, or independently as the sole cargo carrying piece of equipment you have available for your ride. Sometimes we just need a little extra room for our essential and bulky gear. Other times we might just feel strongly against adding luggage racks or potentially paint scratching saddle bags to our bike itself. Now there is an option - Our system can be added to a wide variety of motorcycles, allowing one to "Adventure Tour" with almost any type of bike - opening the possibility of an adventure with perhaps your favorite motorcycle, a trip which might not be available or even possible otherwise.

Adventure Touring, especially riding solo, can require a person to carry enough gear to be self sufficient. When riding in groups or even in a pair, much of one's essential gear can be split up amongst you and your companions. However, when touring solo the required gear can become a little overwhelming at times, somewhat heavy for the bike and it's suspension, really, just plain bulky. This experience is even more evident when touring with a smaller displacement plated dirt bike, Harley style street cruiser, or street racing inspired style of motorcycle with limited luggage carrying abilities. The Revolution System solves those problems, and solves them well.

A Quick Release style of skewer runs through the bike's factory hollow rear axle, or through one of our custom SPiN hollow rear axles or adaptors, creating a solid connection of the trailer to the bike itself. The trailer then maintains the same angle/bank/degree as the motorcycle while cornering and encountering obsticles in the road or trail. When the bike leans, so does the trailer, creating more of an extension of the motorcycle itself rather than acting as an unwanted additional piece of equipment bolted to the bike.

The carrying capacity depends upon the shock, rider, terrain, wheel travel setting, and the tow vehicle being used. Cargo capacity can easily exceed 80+ lbs (36kg.) especially when the trailer mounted behind a quad or other 4 wheeled vehicle. More weight can be added with this style of tow vehicle without feeling the effects as much as with a motorcycle.

The single biggest problem with towing a trailer off-road is the simple fact that trailers have two opposing wheels. When one wheel of the trailer is raised, for instance while encountering a rock or hole in the road or trail, the trailer itself tries to twist independently of it's tow vehicle. All of that independent twisting force and motion from the trailer is transferred directly into the tow vehicle itself - not good if the tow vehicle happens to be a motorcycle, relying on balance and "anticipated" inputs into the bike.

Single Wheel Trailers are not affected by rough and laterally undulating terrain like two wheeled trailers. The Revolution essentially track in the same line as the motorcycle, which means the trailer is encountering the same obstacles in the road or trail, and in the same "way" as the motorcycle. Just this aspect alone drastically allows the rider to better anticipate how the bike and trailer are going to react over certain terrain. 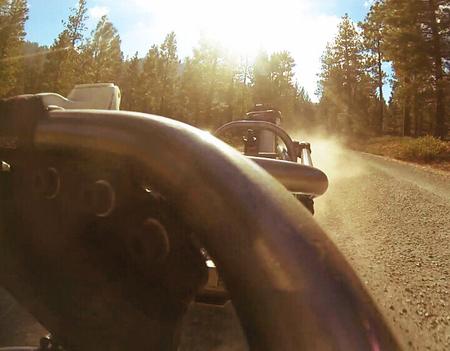 HOW MUCH DOES IT COST?

WHY a single wheel trailer?

This system comes with LED Brake and Turn Signal Lights built in, and is considered fully street legal in most states and countries. However, always check with your local law enforcement to get the exact laws and restrictions for your area.

In many areas, trailers need to be registered and licensed. Your local DMV or State/Local Police website should be able to tell you what you need to do, if anything, to be legal on the road. 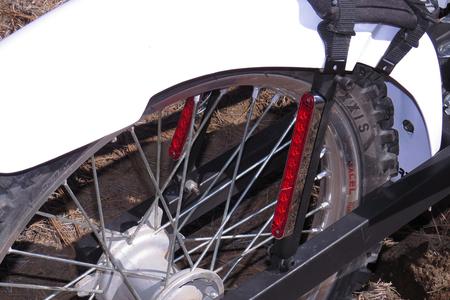 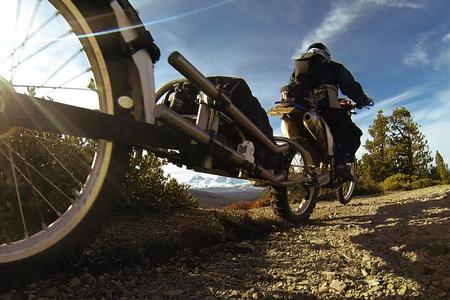 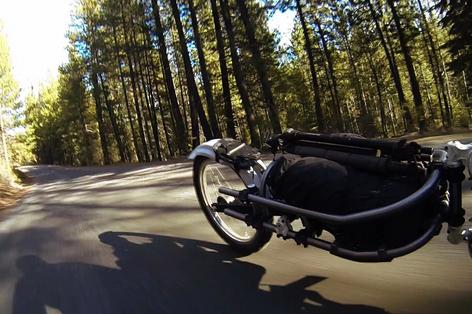 View on Mobile
overflow-y: scroll; /* has to be scroll, not auto */ -webkit-overflow-scrolling: touch;